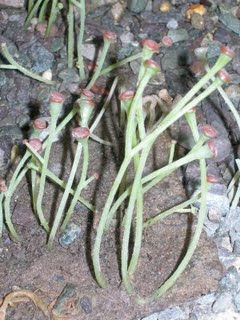 It is thought that all plants trace their ancestry back to aquatic green algae. The plant groups evolved as a response to a move onto land which, according to liverwort-like spores from a borehole in Oman, probably occurred in Ordovician times, around 475 million years ago. The move by plants onto land resulted in soil formation and increased oxygen levels in the atmosphere, and this cleared the way for the subsequent move onto land by animals.
The oldest plant macrofossils (2 cm to 3 cm high) are Silurian, from around 425 million years ago, and come from Devilsbit Mountain, Co. Tipperary in Ireland. These moss-like specimens belong to the genus Cooksonia, which was first described from S. Wales by W.H. Lang in 1937, and named after fellow palaeobotanist Isabel Cookson. The Tipperary specimens were discovered by TCD postgraduate student John Fehan in the 1970s. Specimens have since been found in Scotland, England, Bohemia, Kazakhstan, Siberia, USA, Canada, China, Bolivia and Brazil. In 1992 Diane Edwards published photographs of xylem vessels in Cooksonia specimens from Shropshire – thus confirming that this was a vascular plant. The first seed plants did not evolve until the end of Devonian times, some 65 million years later.
Labels: Ireland's Flora