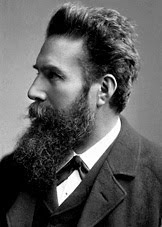 In 1901 Wilhelm Röntgen was awarded the first ever Nobel Prize for Physics, for his ‘accidental’ discovery of x-rays. Röntgen was a modest man who never patented his discoveries, but there can be few who have done more to relieve human suffering - as the use of x-rays has completely transformed surgery, and many other areas of medicine.

In the late 1880s Sir William Crookes, amongst others, had been investigating the effect of running electrical currents in partial vacuums and noted that photographic plates stored in his lab kept getting 'fogged up' before he could use them – but apart from writing to complain to his photographic suppliers he thought nothing more of it. In 1879 Crookes had invented a piece of apparatus which allowed a current to be passed through an evacuated glass tube, and Röntgen was working with such a ‘Crooke’s Tube’ (or ‘Hittorf Tube’) in 1895 in Würzburg when he noticed that a nearby piece of paper coated in barium platinocyanide started to glow whenever the electric current was switched on, even though the tube was completely blacked out. He deduced that some invisible ray was passing through the card blackout onto the paper, and on testing other materials found that the ray passed through wood and plain paper but not metal. When Röntgen’s wife held up a photographic plate in front of the tube, an image of the bones in her hand, complete with its wedding ring, became one of the first x-ray photographs ever produced. 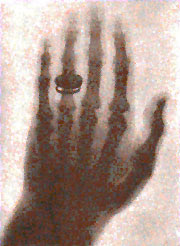 By January 20th 1896 a doctor in Berlin had detected a glass splinter in a patient’s finger using x-rays (see Frog Blog 20/1/09), and on February 7th 1896 a doctor in Liverpool x-rayed a bullet in a boy’s head, and x-rays had become an indispensable part of modern medicine (x-rays are also used to destroy cancer cells and ringworm).
The announcement of the discovery of x-rays caused a sensation all over the world and there was a very real fear of “intimate photographs” which “would be an insult to decency” being taken by street photographers. A London firm even marketed x-ray proof underwear. Röntgen called the rays x-rays as not much was known about them and ‘x’ is used in maths as a symbol of the unknown. They should officially be called ‘Röntgen rays’, but that is a difficult name for English speaking people to pronounce so we stick with x-rays.

Röntgen’s parents Friedrich and Charlotte, who were cousins, ran a cloth merchant’s business in Lennep 30 km east of Düsseldorf. Their only child was born on March 27th 1845, and when Wilhelm was just 3 the family moved to Apeldoorn in the Netherlands, where Charlotte had family connections. Röntgen enjoyed horse riding and ice skating when young, but did not excel at school – where he was graded as “unsatisfactory” in Physics! At the age of 19 he was expelled from Utrecht Technical School following an incident which involved the drawing of a caricature of one of the teachers. Röntgen was labelled “an insufferable and disturbing student”, and failed in his attempt to get in to the university at Utrecht, largely based on an exam which tested his knowledge of Classics. Eventually he got a place in the Federal Polytechnic Institute in Zurich, where he was taught by famous scientists such as Kundt and Clausius.

Interestingly enough this was the same institute where Albert Einstein studied Maths and Physics some 30 years later. Einstein too had been expelled from his school for being disruptive – apparently on the following grounds “yes it is true that you do nothing wrong but you sit in the back row and smile, and that violates the feelings of respect which a teacher needs from a class”.

It seems that Röntgen enjoyed the student life in Zurich, and in 1868 graduated as an engineer – then continued his studies working on a thesis on the properties of gases. He spent time in a student pub Zum Grüner Glas, where he met his future wife Anna Bertha – the landlord’s daughter. Kundt encouraged Röntgen to become a physicist, and in 1870 he accompanied Kundt to Würzburg, acting as his assistant. Röntgen’s lack of a classical education barred him from being properly recognised by the University, and a further move to the more liberal University of Strasbourg in 1872 by Kundt allowed Röntgen to be employed officially in a university for the first time. Röntgen was married in that same year, and later moved to Hohenheim, Strasbourg (again), Giessen and eventually, in 1888, back to Würzburg where he was made professor of Physics and then Rector of the University (1894). He made his observations of x-rays, in the building shown below, on the evening of November 8th in 1895 and a preliminary publication “Ober eine neue Art von Strahlen” (About a New Kind of Rays) was presented to the Würzburg Society for Medical Physics on 28th December. 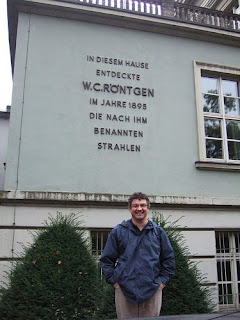 Röntgen did virtually nothing further with his studies of x-rays, and in 1901 moved to Munich as director of the Physics Institute in the University there. Following the death of his wife he retired from his chair in 1920, and died on February 10th 1923 in his house at 11 Maria-Theresienstrasse in Munich at the age of 78.
Click here for a previous post on the first use of x-rays in medicine.
Labels: Great Inventions Medicine People in Science Physics Stuff Teacher Travels