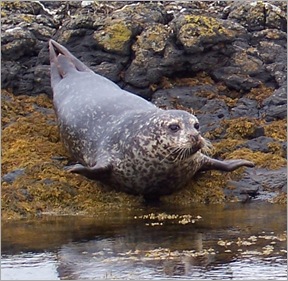 The Grey Seal, or Halichoerus grypus, is one of two types of seals in Irish waters, the other being the Common Seal. The Grey Seal occurs in greatest numbers on the western seaboard of Ireland although Grey Seals are found in Dublin Bay and at the Saltee Islands, Co Wexford. In fact half of the world’s population are found around the British Isles. It is a medium sized seal, with the bulls reaching 2.5–3.3 m in length and weighing up to 300 kg; the cows are much smaller, typically 1.6–2.0 m long and 100–150 kg weight. It differs from the Common Seal by its straight head profile with nostrils that are well apart, and fewer spots on its body. The body is streamlined to allow easy swimming and both the fore and hind limbs have been modified into flippers used to propel the seal through the water. These seals, whilst quite large, are very well adapted to swimming and the marine environment. They have a lifespan of between 26 and 38 years old.

The grey seal is Ireland’s largest carnivorous mammal. Its thick, insulating layer of blubber and waterproof fur allow it to survive in cold water temperatures that would kill a human within minutes. These seals generally breed in Irish Waters from September to December on remote and generally undisturbed areas, in particular offshore islands. Pups are born with a white coat that they shed before they can take to the water, usually after about six weeks. The mother stays with the pups whilst they remain on the shore. These seals shed their fur during the spring

months and remain ashore for the majority of this time. Counts of these seals are undertaken during the pupping and moulting period to allow an estimate on the national population to be generated. They feed on a varied diet of fish, octopus, squid, eels or whatever is available.

Friends of the Frog Blog, the Irish Seal Sanctuary, have a great website. The seal sanctuary provides shelter, treatment and rehabilitation for rescued seals found around Ireland’s coast. Click here to visit their site. Be sure to check out the seal pages to find out more about seals. They also have a great Seal Sanctuary Blog, which give loads of pictures of what goes on at the sanctuary. On the Form I Science Trip this year, we visited the Seal Sanctuary in Portaferry, at the Exploris Aquarium, in Northern Ireland. Click here to visit their brilliant website.