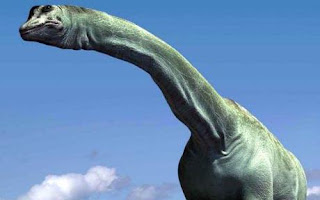 A new dinosaur fossil has been uncovered in South Africa which may reveal the secrets of how some of the giant dinosaurs of the Jurassic Period got so big. Sauropods, the largest of the dinosaurs, were giant plant eaters which walked on all fours and had long necks and tails. This newly discovered dinosaur, Aardonyx celestae, appears to be a close relative of the sauropods that would have walked on two legs for most of the time yet would have walked on four legs when eating. Palaeontologists also believe that this animal would have eaten in the same way as a sauropod, gulping food with its gaping mouth. In Aardonyx, this binge-eating adaptation probably paved the way for sauropods to evolve their titanic sizes, the researchers say. For more information on this story, click here.
Labels: Dinosaurs Today's Science News