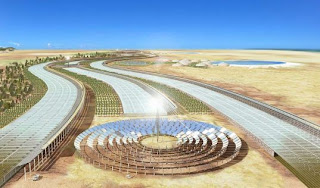 A German consortium are planning a major solar power project for the Sahara desert, which will aim to provide nearly 15% of Europe's electricity needs by 2050. The project, which will cost a whopping 300 billion Euro, hopes to create 240,000 jobs and generate 2 trillion Euro worth of power by 2050. The solar technology involved is known as concentrated solar power (CSP) which uses mirrors to concentrate the sun's rays on a fluid container. The super-heated liquid then drives turbines to generate electricity. The advantage over solar photovoltaic panels, which convert sunlight directly to electricity, is that if sufficient hot fluid is stored in containers, the generators can run all night. This is not new technology and is similar to solar plants in California, Nevada and Seville, but the scale at which this new project is proposed makes it stand out from the crowd. The Sahara is ideal for such a project; if just 0.3% of the Sahara were devoted to CSP technology, enough electricity would be produced to power all of Europe. This must be seen as progressive thinking as we head into more challenging times for electricity generation. More innovative projects like this are required, although it should also be a priority to provide energy to local African consumers too.
Labels: Today's Science News