Science Fact of the Week 35 - The Biggest Living Bird 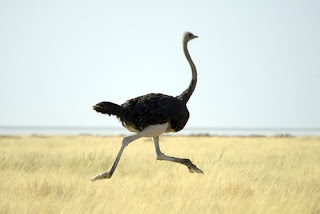 The largest and strongest living bird is the ostrich, or Struthio camelus. The ostrich is a flightless bird native to Africa. It is the only living species of its family. Males can be up to 9 feet (3 m) tall and weigh over 150 kg, but are typically about 8 feet (2.5m) tall and about 100 kg. Although ostriches cannot fly, they are very fast runners, reaching speeds over 40 mph. They may use their wings as "rudders" to help them change direction while running. An ostrich's powerful, long legs can cover 10 to 16 feet (3 to 5 meters) in a single stride. These legs can also be formidable weapons. Each two-toed foot has a long, sharp claw. Their small, flat heads and long necks are almost bare and the rest of their body is covered with longer feathers. The plumage of adult males is glossy black, and the wings and tail feathers are white. The females and young males are greyish-brown. A flock is usually made up of one male and two to six females.
Each female lays two to five eggs in the communal nest. Consequently, the clutch will range from 12 to 16 eggs. Each egg will weigh about 1.5 kg. The nest is simply a cavity scooped from the ground. The dominant pair (male and female) take turns sitting on the nest. If threatened while sitting on the nest, the hen will press her long neck flat along the ground, blending with the background. Contrary to popular belief, ostriches do not bury their heads in the sand. In the wild, they are found in dry and sandy regions of Africa, and are very well adapted to desert life. Ostriches typically eat plants, roots, and seeds but will also eat insects, lizards, or other creatures available in their sometimes harsh habitat. When fully grown they have one of the most advanced immune systems of any animal. The ostrich has the largest eye of any land animal - measuring almost five centimeters across. Ostriches have been raised in captivity as a source of food.
The biggest bird ever to live was another flightless bird, the Giant Moa, native to New Zealand, which went extinct in the late 1700's or early 1800's. They were over 13 feet tall! However, the extinct Elephant Birds of Madagascar would have been the heaviest birds, weighting over a tonne each. 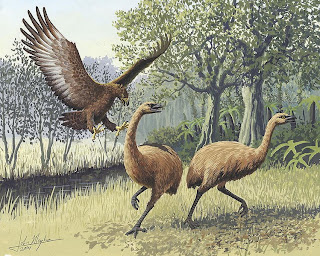