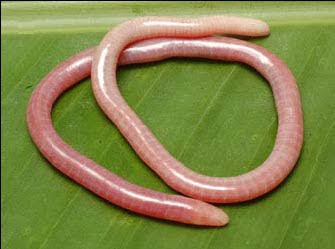 A new amphibian species, which looks like a giant worm, has been discovered in Guyana. The newly discovered species can survive on land with no nostrils, lungs, or legs. The creature is part of the wormlike group of amphibians known as caecilians (one of which is pictured above). Only one other caecilian species is known to live without lungs. In general, the presence of lungs is among the key characteristics that make amphibians different from fish, but this species breathes through its skin.
Until recently, scientists thought salamanders were the only amphibians that lack lungs. But in 1995 researchers found the first known lungless caecilian, and in 2008 another team reported a tiny, land-dwelling, lungless frog (click here to see a National Geographic story on the lungless frog). The new species is even more of a surprise because the animal, Caecilita iwokramae, is strikingly different from the other known lungless caecilian. Caecilita lives on land and is just 11 cm long, while its lungless relative is fully aquatic and reaches 70 cm in length.
Labels: Nature Notes Today's Science News