Gideon Algernon Mantell, English geologist and palaeontologist, was born in 1790 at Lewes, Sussex. The son of a shoemaker, he was educated for the medical profession, but found time to carry out research on the palaeontology of 'secondary' rocks (Mesozoic), particularly in Sussex. His hobby quickly became an obsession and Mantell soon became known as a competent geological investigator. His most remarkable discoveries were made in the Wealden formations. He demonstrated the fresh-water origin of the strata, and from them he brought to light and described the remarkable Dinosaurian reptiles known as Iguanodon (shown below), Hylaeosaurus, Pelorosaurus and Regnosaurus. For these researches he was awarded the Wollaston medal by the Geological Society and a Royal medal by the Royal Society. He was elected F.R.S. in 1825. Among his other contributions to the literature of palaeontology was his description of the Triassic reptile Telerpeton elginense. Towards the end of his life Dr Mantell retired to London, where he died on this day, November 10th, 1852. 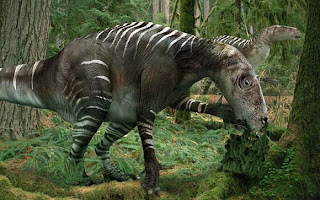 Labels: Dinosaurs On This Day Palaeontology People in Science