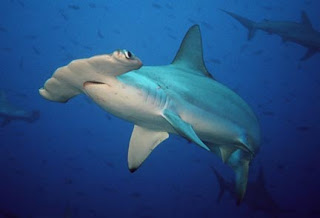 New research has revealed the reason for the oddly shaped cranium of the hammerhead shark. Scientists in the US have discovered that the odd shape of the head allows the sharks, which can grow up to 20 ft long, to have a 360 degree field of vision in all directions. Not only do they have front, back and side vision they can also see vertically and judge depths, claims the study. The evolution of the odd shaped head has been a mystery to scientists for many years, and many reasons such as manoeuvrability, smell and inbuilt "sonar" have been hypothesised. But this is the first time it has been proved that the odd shape improves their eyesight. The researchers used a machine called an "electroretinogram" to test the field of vision - firing a tiny beam of light at the shark in a darkened tank from all directions. Electrodes embedded in the shark then picked up any signals sent from the eye to the brain. Comparing them with pointy nosed species, the team found that the scalloped hammerheads had the largest visual field for each eye. Both eyes together offer all round vision and even overlap at the front, creating an effect like binoculars. Fascinating stuff. For more information click here.
Labels: Marine Biology Today's Science News