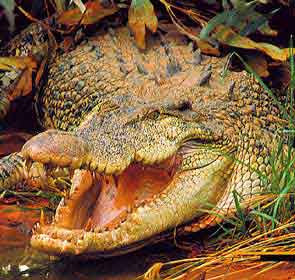 The largest living reptile on Earth is the Saltwater or Estuarine Crocodile. Males are an average of 5 meters in length and weigh over 450 kilograms, but specimens 7 meters long and weighing 1,000 kilograms are not uncommon. Saltwater crocodiles, or "salties," as Australians affectionately refer to them, have an enormous range, populating the brackish and freshwater regions of eastern India, Southeast Asia, and northern Australia. They are excellent swimmers and have often been spotted far out at sea. Classic opportunistic predators, they lurk patiently beneath the surface near water's edge waiting for potential prey to stop for a sip of water. They’ll feed on anything they can get their jaws on, including water buffalo, monkeys, wild boar, and even sharks. Without warning, they explode from the water with a thrash of their powerful tails, grasp their victim, and drag it back in, holding it under until the animal drowns.

Population estimates range from 200,000 to 300,000 worldwide, and they are considered at low risk for extinction. But saltwater crocodiles hides are valued above all other crocodilians, and illegal hunting, habitat loss, and antipathy toward the species because of its reputation as a man-eater continue to put pressure on the population. They reproduce in the wet season, with the female crocodile laying up to 60 eggs at a time. When the crocodiles are born, only a very small number of these survive in the wild and grow to be adult crocodiles. Amazingly, the temperature of the egg determines the sex of the offspring.
Labels: Nature Notes Science Fact of the Week