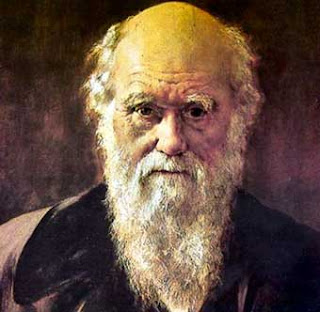 Rowan Hopper, from New Scientist, asks the questions. Charles Darwin delivers the answers? Well, this seemingly impossible interview is now brought to life. Using Darwin's words, Hopper recreates the questions which nobody had a chance to ask. Below is an extract from the article, but click here for the full "transcript".
Hopper: What was it like, coming up with the idea that changed the world?
Darwin: Like confessing a murder.
Hopper: The emotional and physical struggle you went through must have taken its toll.
Darwin: I have suffered from almost incessant vomiting for nine months, & that has so weakened my brain, that any excitement brings on whizzing & fainting feelings.
Hopper: You would clearly rather I didn't excite you further, but I must say that when I grasped your idea that life has been changing, evolving, for billions of years, I was captivated.

Darwin: You cannot imagine how pleased I am that the notion of Natural Selection has acted as a purgative on your bowels of immutability. Whenever naturalists can look at species changing as certain, what a magnificent field will be open.
Hopper: Quite so. Now I must put to you the question that authors are inevitably asked: how did you get your ideas?
Darwin: It seemed to me probable that allied species were descended from a common parent. But for some years I could not conceive how each form became so excellently adapted to its habits of life. I then began systematically to study domestic productions, & after a time saw clearly that man's selective power was the most important agent. I was prepared from having studied the habits of animals to appreciate the struggle for existence, & my work in geology gave me some idea of the lapse of past time. Therefore when I happened to read "Malthus on population" the idea of Natural selection flashed on me.
Labels: Darwin's Bicentenary