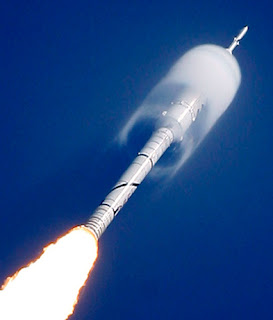 Above is a newly released picture (from New Scientist) of NASA's Ares I-X rocket during its inaugural flight over Florida's Kennedy Space Centre last week. Ther rocket reached nearly five times the speed of sound during the launch. The six-minute, $450-million test flight was designed to help NASA refine its plans for Ares I, the next-generation rocket that - combined with the Orion crew capsule - is destined to replace the aging space shuttle as the country's primary means of ferrying humans and cargo into space. Subsequently, on the recovery of the rocket it was found that some damage had been caused when it fell into the sea, as two of the parachutes failed to deploy.
Labels: Today's Science News

Chris M said…
The future of human space exploration looks bleak. After making great leaps 50 years ago, stagnation has taken over. No human has left Earth orbit in 37 years, and NASA's current unambitious goals look to be further delayed or scaled back.