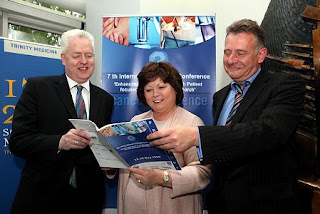 A great friend of this blog, Professor Mark Lawlor (the grey haired one above), and his team in Trinity College and St. James' Hospital Dublin have identified a new drug called Pbox-15 which appears to kill leukemia cells whilst leaving healthy blood and bone marrow cells untouched.

Leukemia is a whole group of blood or bone marrow cancers which cause a proliferation of blood cells. In laboratory trials using cells from patients suffering from chronic lymphocytic leukemia (CLL), Pbox-15 was found to work well on cells which did not respond to current treatments (such as fludarabine). CLL is a common form of leukemia and caused an average 74 deaths per year in Ireland between 2000 and 2005.
Pbox-15 seems to work by attacking the internal 'cytoskeletons' of cancer cells but, although the results of the tests are highly promising, there is a long way to go before possible side-effects and optimal dosages etc. have been fully investigated. This breakthrough has resulted from international collaboration with Belfast City Hospital and the University of Siena, Italy - and has been partly funded by the Irish Cancer Society.