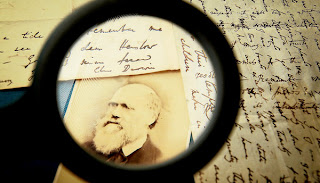 The Irish Times Science Daily supplement (which we are loving these days, keep it up guys) features two excellent articles today. The first is a look at Charles Darwin's evolution as a scientist, particularly as a geologist (click here), while the second looks at how fifteen recent scientific studies (all of which were published in Nature) are providing powerful "evolving evidence" for the theory (click here). Featured below is number one, the origin of feathers. We published a long series of posts on Darwin's bicentenary earlier this year. Click here to see.
The Origin of Feathers
The fossil record is one of the main pillars of evidence on which the theory of evolution stands. But critics claim the fossil record is fatally flawed because of the lack of “transitional forms” that illustrate intermediates in the transition of one major group of animals to another. The critics are wrong, and the first two cases I will cite describe examples of transitional forms. Evolutionists tell us that modern birds are descended from dinosaurs. A famous fossil that provides evidence for this was discovered in Bavaria in 1861. The fossil is called Archaeopteryx . The creature displays reptilian features, such as teeth and a long, bony tail, but it also has wings and flight feathers like a bird. It is commonly interpreted as a fossil of the earliest known bird. But has the fossil record thrown up any dinosaurs with feathers – unambiguous transitional forms?
Yes. Fossils found in China in the 1980s showed a variety of dinosaurs with feathers and feathery plumage. Many of these feathered dinosaurs could not have flown, which means that feathers evolved for reasons other than flight (heat insulation, for example). Flight was an extra opportunity that was exploited by creatures already carrying feathers.
Labels: Darwin's Bicentenary Geology Web Links