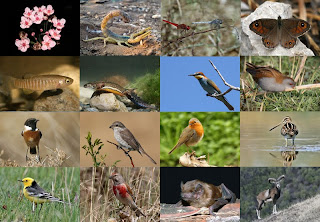 In this month's Science Spin, Ireland's top science magazine, Tom Kennedy writes about plans to create a complete encyclopaedia of all earth's living things. Below is an extract from the article. Click here for the complete article or here to find our more about the Encyclopaedia of Life.
"Biologists have joined together in an ambitious project to create an encyclopaedia of all the world's known species, plant and animal. This is the first time that a comprehensive description of the world's diversity has been attempted. The venture is called the EOL (or Encyclopaedia of Life) Project. The number of known species is close to 2 million, and biologists estimate that there could be in the region of 10 million different forms of life on Earth.The actual number of different species depends on how strictly we define the term, and while we all know the difference between a horse, a dog and a cat, it can take the keen eye of a birdwatcher to distinguish between one type of crow and another. Even so, a jackdaw is a lot different from a rook. Apart from a significant difference in size, a jackdaw is not going to become matey with a rook, or indeed any other type of crow, and this is one of the ways that scientists can tell one species from another. About thirty types of crow inhabit the world, and each of these species could be regarded as a distinct gene pool."