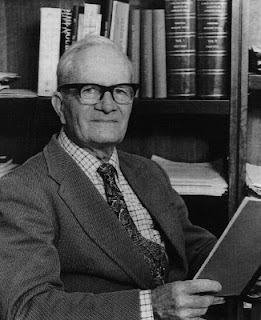 William Hayes (FRS) was a physician, microbiologist and geneticist who made significant contributions to modern genetics and molecular biology. William Hayes established the research field of bacterial genetics, when he discovered the processes of genetic transfer during cell reproduction. He will also be remembered for his superb classic textbook: The Genetics of Bacteria and Their Viruses (1964).
He was born on the 18th January 1913, in Edmondstown and attended school here in St. Columba's College from 1927. He is reported to have done extremely well in his entrance exam. His formal schooling did not include science but, as was the custom of the day, focused on the classics. In 1929, he won the Lord Pembroke Prize for Mathematics. Bill particularly appreciated the efforts of one master, Dr Sandham Willis (after whom a classroom is named in St. Columba's), who encouraged William to read beyond the school curriculum.
After his time in St. Columba's, Hayes attended Trinity College studying medicine. There he started to learn bacteriology and immunology under Professor J.W. Bigger, which stimulated his interest to the point that he enrolled to take an extra year to read for an Honours Degree in Natural Science in which he could specialize in bacteriology. After completing this degree, he continued to work with Bigger as his assistant. In 1941, Hayes joined the Royal Army Medical Corps and spent time in India during the Second World War. On his return from the war, he took up a post in Trinity College Dublin as a Lecturer in Bacteriology. In 1949 he used his presidential address to the pathology section of the Royal Academy of Medicine in Ireland to explain the recent developments in bacterial genetics and their significance for medicine. He submitted his accumulated published work for the degree of Doctor of Science and this degree was duly conferred by Dublin University in 1948. Subsequently, he accepted a post as Senior Lecturer in Bacteriology at the Royal Postgraduate Medical School at Hammersmith in London in 1950. Here he continued to carry out research in the area of bacteriology and genetics. In 1964 he was elected as a Fellow of the Royal Society (FRS). This led the way to a change of scenery for William and in 1968 he moved to Edinburgh and was appointed as Professor of Molecular Genetics in Edinburgh University. However, in Edinburgh he had little time for research as his teaching commitments were high.
In 1974 he moved to Australia and was appointed Professor and Head of the Department of Genetics, Research School of Biological Sciences, Australian National University where he stayed for four years. He continued his research there, most notably on E. coli. He retired from teaching in 1979, but was a visiting fellow of the Botany Department of ANU until 1986.
He died on the 7th January 1994 from heart problems. He will be remembered as one of Ireland's great modern scientists but also as a great Columban. A plague in his honour is on view in the Science Building of St. Columba's College.
Labels: Famous Irish Scientists