In a new series of posts, we are going to explore the large variety of mammals in Ireland, hoping to form a complete collection over time. Many of these articles will be written by pupils. 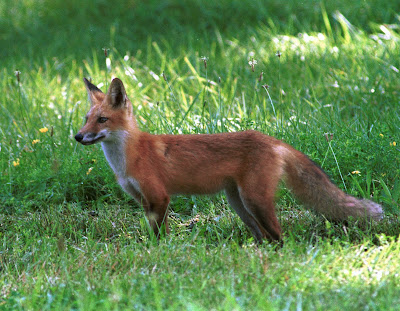 The Red Fox or Vulpes vulpes is one of the most common mammals on the island of Ireland. It is easily identified by its reddish brown coat with light under-parts. Foxes are found in woodlands, farmland, sloblands, sand dunes and have even adapted successfully to urban life. The fox's most distinctive features are its narrow muzzle, large ears and long bushy tail (called a brush) with a white tip, normally 38cm long. Foxes are normally solitary and are most often seen at dusk. Young males, without territories, tend to roam widely. The vixen (female) is smaller than the dog (male). The red fox eats a wide variety of foods. It is an omnivore and its diet includes fruits, berries and grasses. It also eats birds and small mammals like squirrels, rabbits and mice. A large part of the red fox's diet is made up of insects. Urban foxes have become very adept at raiding town dustbins.
In winter, foxes meet to mate. The vixen typically gives birth to a litter 4 or 5 pups. At birth, red foxes are actually brown or gray. A new red coat usually grows in by the end of the first month, but some red foxes are golden, reddish-brown, silver, or even black. Both parents care for their young through the summer before they are able to strike out on their own in the autumn. Interestingly, the red fox, unlike other mammals, hears low-frequency sounds very well. They can hear small animals digging underground and will frequently dig in the dirt or snow to catch prey. The red fox has a typical lifespan of between two and four years, however, the mortality rate of urban foxes is higher than that of their rural cousins.
Humans have a love / hate relationship with foxes, particularly in Ireland. Although one of the most loved mammals, they are often hunted for sport or culled due to predation on farm animals such as lambs or chickens. They are also considered to be a vector for disease. However, fox numbers show no sign of decreasing and the red fox should continue to thrive in Ireland.
Labels: Ireland's Fauna Ireland's Mammals